In Pakistan, mostly women are crazy about Mehndi.  So, Today we talk about latest Mehndi Designs. These Designs are included Arabic, Pakistani and Indian styles.

Mehndi is basically a temporary decoration on the skin. Many people also think of it as a temporary tattoo. It is applied by women to hands and feet in Pakistan, India and Bangladesh and Arab countries. They are applied on weddings as well as Muslim and Hindu festivals. Mehndi has now become quite popular in the west also where it is called henna tattoos. It is applied on the body and arms also. In the east, it is applied on hands and feet only where it is prominent. There are henna artists now all over the world who apply beautiful mehndi on the hands and feet of women. The designs can range from quite simple ones for kids and girls to quite intricate ones for brides. 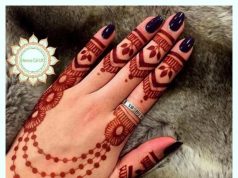